«You have to shed light on the past!»

NL: What are your next steps?

NL: Thank you for this insight into a pro­mi­sing project! 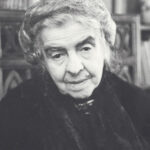 «She was a pioneer of inter-religious dialog.»

«Provenance research is always an adventure!»